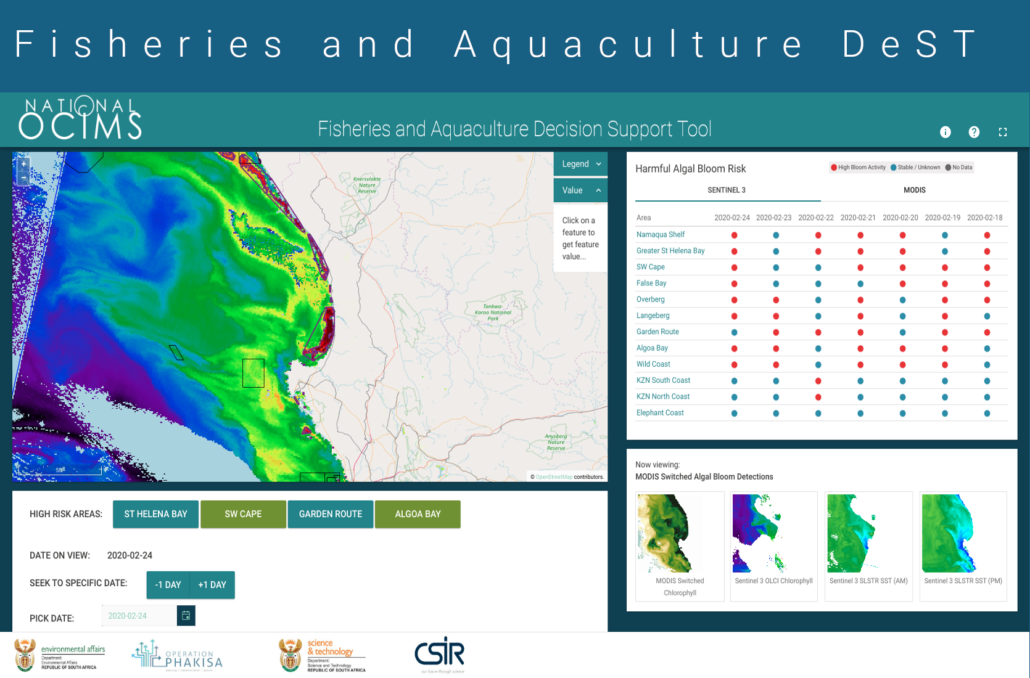 The South African west and south coasts suffer from the frequent occurrence of Harmful Algal Blooms (HABs). These blooms can have considerable negative impacts on commercial marine concerns such as rock lobster and aquaculture operations, in addition to local marine ecosystems and communities. Examples of typical rock lobster loss for large events range from 200 to 2000 tonnes, with an estimated direct economic loss of ± 8 USD to 80 million USD per event, in addition to the indirect ecosystem and sustainability impacts. In Feb 2015, 200 tonnes of cape rock lobster suffered from hypoxia and exited the ocean with 80% mortality. The economic value of the event was estimated at R114 million.

HAB impacts come about through either the toxicity (to humans and animals) of some bloom species (e.g. red tides), or collapse of high biomass blooms through nutrient exhaustion, leading in extreme cases to hypoxia and dramatic mortalities of marine organisms, of which crayfish strandings on the West Coast are the most well-known. HABs are expected to become more common as the oceans warm as the climate changes, with earlier onset and longer durations of HAB “seasons”.

This science and relevant datasets are translated and digested into this simplified DeST via a set of computational processing chains and data management systems that present an interactive map based dashboard to end users. In addition, a HAB bulletin is occasionally issued by Council for Scientific and Industrial Research (CSIR) when noteworthy HAB-related events occur. This bulletin is distributed to members of government departments (Department of Environmental Affairs and Department of Agriculture, Forestry and Fisheries), Provincial Disaster Management Centres and various mariculture companies.

The National OCIMS is the result of collaborative partnerships led by the Department of Environment, Forestry and Fisheries and managed by the Council for Scientific and Industrial Research. The project has drawn from the expertise of government, labour, business, academia and other sectors. It serves under the premise of Operation Phakisa a national government project.

Because these cookies are strictly necessary to deliver the website, refuseing them will have impact how our site functions. You always can block or delete cookies by changing your browser settings and force blocking all cookies on this website. But this will always prompt you to accept/refuse cookies when revisiting our site.

We fully respect if you want to refuse cookies but to avoid asking you again and again kindly allow us to store a cookie for that. You are free to opt out any time or opt in for other cookies to get a better experience. If you refuse cookies we will remove all set cookies in our domain.

We provide you with a list of stored cookies on your computer in our domain so you can check what we stored. Due to security reasons we are not able to show or modify cookies from other domains. You can check these in your browser security settings.

If you do not want that we track your visit to our site you can disable tracking in your browser here:

We also use different external services like Google Webfonts, Google Maps, and external Video providers. Since these providers may collect personal data like your IP address we allow you to block them here. Please be aware that this might heavily reduce the functionality and appearance of our site. Changes will take effect once you reload the page.

The following cookies are also needed - You can choose if you want to allow them: