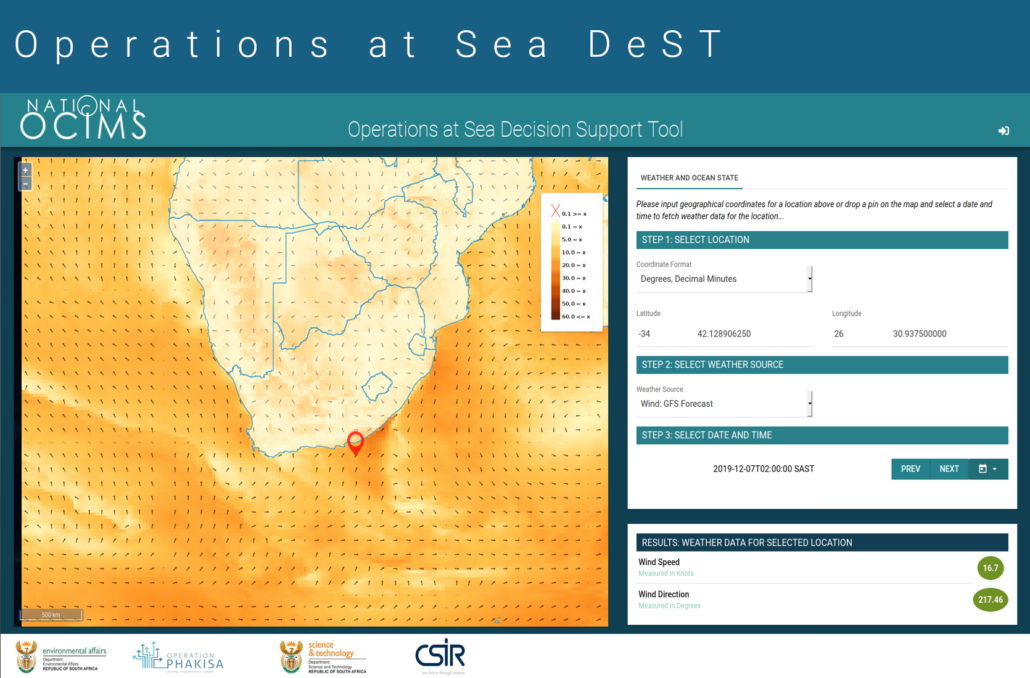 South Africa’s Exclusive Economic Zone (EEZ) encompasses the coastal ocean and shelf sea waters. The region is characterised by one of the world’s most  energetic and productive ocean systems, namely the Agulhas Current and Benguela Upwelling System. Both play fundamental roles in the marine environment, its resources and ecosystem and the regional weather and global climate.

Our ability to predict the ocean and sea state surrounding southern Africa represents a direct benefit to the industrial, commercial and leisure activities, including the monitoring of accidental pollutants, such as oil spills as well as harmful algal blooms.

The Coastal Operations at Sea (CoastOps) Decision Support Tool (DeST) provides a capability for monitoring and predicting ocean and sea state variables in the coastal ocean using state-of-art forecasts of winds, currents and waves, which are provided by numerical models that simulate and predict ocean and atmospheric conditions. Ocean and atmosphere general circulation models are complex mathematical models, that use the Navier-Stokes equations on a rotating sphere as the basis for computer programs to simulate the Earth’s atmosphere or oceans on a range of spatio-temporal scales. Similarly, wave models simulate the sea state and predict its evolution using numerical techniques taking into consideration atmospheric wind forcing, non-linear wave interaction and frictional dissipation. In an integrated and coupled approach these modelling systems provide the ocean current, wave and wind forecasts used in the DeST.

The Delft3D Flexible Mesh Suite for modelling the coastal ocean, estuaries and rivers is used here providing ocean and sea state forecasts for the coastal ocean for key port cities, including:

The NSRI relies on a variety of tools and data streams to coordinate their search and rescue operations, none of them optimally tailored to their operational needs. Here, the CoastOps DeST provides a web-based utility that integrates all the necessary information into a digital virtual command center to improve NSRI’s ability to coordinate and respond to search and rescue calls.

The National OCIMS is the result of collaborative partnerships led by the Department of Environment, Forestry and Fisheries and managed by the Council for Scientific and Industrial Research. The project has drawn from the expertise of government, labour, business, academia and other sectors. It serves under the premise of Operation Phakisa a national government project.

Because these cookies are strictly necessary to deliver the website, refuseing them will have impact how our site functions. You always can block or delete cookies by changing your browser settings and force blocking all cookies on this website. But this will always prompt you to accept/refuse cookies when revisiting our site.

We fully respect if you want to refuse cookies but to avoid asking you again and again kindly allow us to store a cookie for that. You are free to opt out any time or opt in for other cookies to get a better experience. If you refuse cookies we will remove all set cookies in our domain.

We provide you with a list of stored cookies on your computer in our domain so you can check what we stored. Due to security reasons we are not able to show or modify cookies from other domains. You can check these in your browser security settings.

If you do not want that we track your visit to our site you can disable tracking in your browser here:

We also use different external services like Google Webfonts, Google Maps, and external Video providers. Since these providers may collect personal data like your IP address we allow you to block them here. Please be aware that this might heavily reduce the functionality and appearance of our site. Changes will take effect once you reload the page.

The following cookies are also needed - You can choose if you want to allow them: