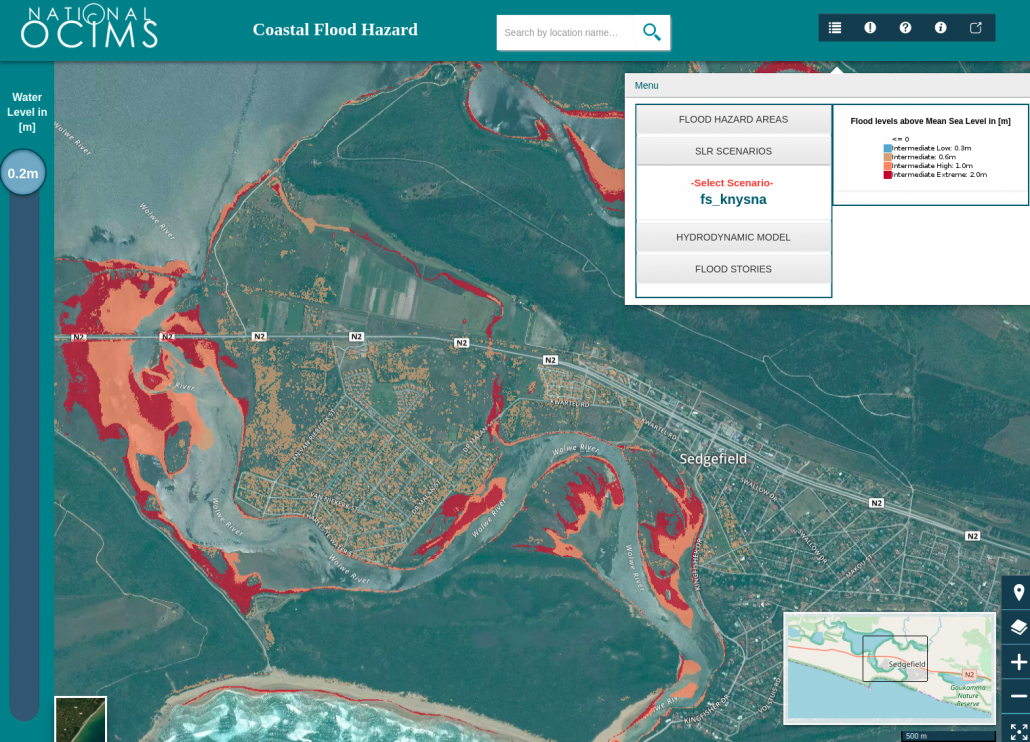 In order to identify coastal areas at risk of flooding and to aid climate change adaptation, the Department of Environmental Affairs (DEA) under the umbrella of Operation Phakisa Ocean Economy has commissioned the development of a Coastal Flood Hazard Decision Support Tool (DeST).

The development of this DeST has been inspired by other internationally available tools, such as the Coastal Risk Australia Viewer and the Sea Level Rise Viewer in the United States of America, just to name a few.

Based on the data available for South Africa, the aim is to provide a DeST that allows e.g. disaster managers, spatial planners and the general public an estimation of coastal areas that are potentially at risk of flooding.

Coastal flooding however, is only one aspect of risks threatening coastal livelihoods and infrastructure. This version of the DeST does NOT consider e.g. effects of coastal erosion and e.g. the breach of coastal protective structures in the event of a storm, nor does it consider hydrological aspects or additional sources of flooding during a storm such as raising ground water or increased flow rates from rivers in the hinterland. The developers are aware that more detailed local studies may be required to ensure that particular local circumstances and dynamics are adequately considered in any adaptation or disaster response context. Further research and development towards this goal is currently underway.

The National OCIMS is the result of collaborative partnerships led by the Department of Environmental Affairs and managed by the Council for Scientific and Industrial Research. The project has drawn from the expertise of government, labour, business, academia and other sectors. It serves under the premise of Operation Phakisa a national government project.

Because these cookies are strictly necessary to deliver the website, you cannot refuse them without impacting how our site functions. You can block or delete them by changing your browser settings and force blocking all cookies on this website.

If you do not want that we track your visist to our site you can disable tracking in your browser here:

We also use different external services like Google Webfonts, Google Maps and external Video providers. Since these providers may collect personal data like your IP address we allow you to block them here. Please be aware that this might heavily reduce the functionality and appearance of our site. Changes will take effect once you reload the page.